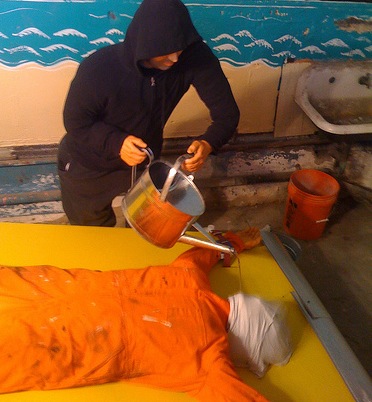 A demonstration of waterboarding at Coney Island. [Creative Commons-licensed photo from the Flickr account of Salim Virji]

The New York Times reported this morning on the conviction of 23 Americans in a case involving the practice of rendition, “in which terrorism suspects are captured in one country and taken for questioning in another, presumably one more open to coercive interrogation techniques,” the Times explained. The criminals were tried in absentia.

I’ve been waiting for this for years. Most of them received 5-year prison sentences, and… wait a minute…

It seemed highly unlikely that anyone, Italian or American, would spend any time in jail.

Unbelievable. Not only does this conviction have no effect on those found guilty—it will have no effect on my sense that justice has failed. At least, justice had failed in Bush’s one-superpower world, which I’m not yet sure is gone under the new U.S. administration.