Here are four clips published summer 2008 in the Wilmington (Ohio) News Journal. For more representative samples of my work, see the this page.

May 21, 2008 — A feature describing how kids learn about life on the American frontier. Oxen had to pull their bus from the mud.

May 24, 2008 — As part of a Memorial Day tribute section to veterans, I met with a local group of Iraq and Afghanistan veterans who gave up on the VA and started counseling each other. 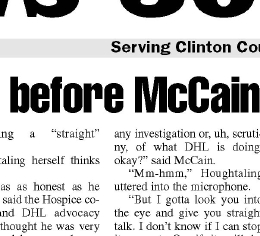 July 11, 2008 — I reported the first national attention the Wilmington area received in its ongoing plight with DHL. Wilmington’s story went on to be featured on 60 Minutes.