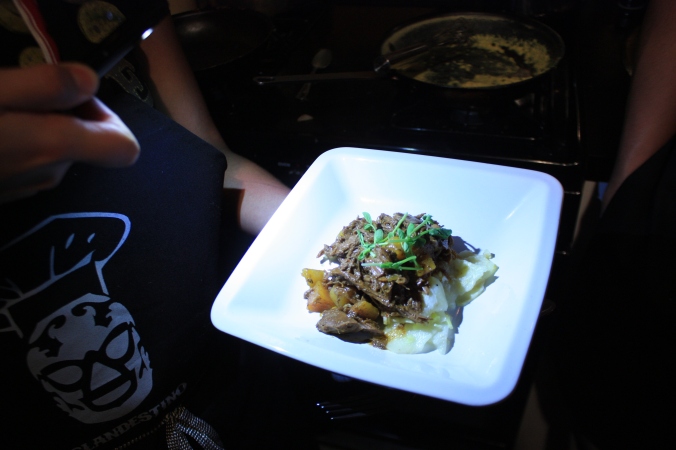 Lamb stew with microgreens over a root-vegetable gratin. Lamb by the Carr family, whose Mint Creek Farm is outside Chicago. Cell phone flash by Mariely Santiesteban, Clandestino staff. Photo by Brandon Smith.

The end of the semester has been upon me. Super-crunch time. But now it’s over until Jan. 20 or so, and I’m happy to fill my time filling this space.

The picture above was taken at the underground dinner club “Clandestino,” at which I volunteered for nearly 12 hours last Saturday. I filed two different stories based on the experience (and in consult with other proprietors of underground dinners in this fine city).

These stories served as final projects for two classes. One’s angle was the locavore aspect of the dinner, whose theme was “200 miles from the loop.” All ingredients except baking powder and oregano came from within that radius. The second story was about the larger trend of underground dining—defined loosely as group meals that take place outside restaurants. It’s big and growing. In fact, these events are prompting traditional restaurants to alter their practices to compete.

I plan to pitch a version of the second story to food publications this winter. Maybe portions of the first story—the eating local aspect—will be a sidebar. When I’ve finished editing everything I’ll post it here for you. In the meantime, take a look at the other photos I shot.