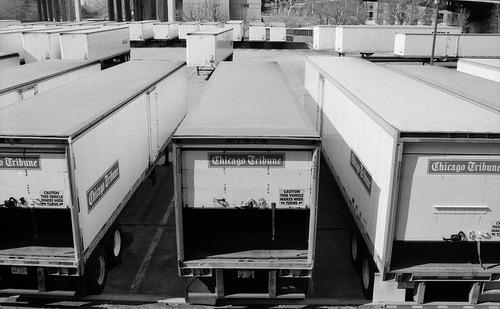 The Chicago Tribune sports the largest newsroom in the midwest, according to its advertising campaign. I chuckle at that choice. I wonder how many other journalists do, too. (CC Flickr photo from Alex Barth)

When I turned to the journalism field for my career, the thought that most plagued me was this: generally, to make any money, one must join a very large corporation—likely a conglomerate with lots of power.

That just never sat right with me. With lots of power comes lots of responsibility, which isn’t usually handled properly. Not that I could do better. Just that I know people are human like me.

But in the past couple years and months, the larger news corporations have fared much worse than smaller ones. …Am I the only one who’s happy about this?

Their struggle to figure out how to make money is most recently described by the New York Times journalist who covers journalism, RICHARD PÉREZ-PEÑA.

…most industry experts agree, entertainment will be easier to charge for than news. It may be hard to prevent free distribution of an episode of “The Office” or “NCIS,” but the product is unique, with no substitute being created by someone else.

A small number of publications already charge for Internet access, including The Wall Street Journal, The Financial Times, Newsday, Consumer Reports and The Arkansas Democrat-Gazette. But they tend to be either specialty products or near-monopolies in local markets, and they generally do not charge enough to fundamentally alter their profit pictures.

But for most general-interest news, any paid site would be competing with alternative versions of the same articles, delivered by multiple free news sources.

“One of the problems is newspapers fired so many journalists and turned them loose to start so many blogs,” Mr. Mutter said. “They should have executed them. They wouldn’t have had competition. But they foolishly let them out alive.”

My journalism professors would probably disown me if they heard my opinion on this, because as the big companies go down the tubes, so do the lucrative benefits packages, decent salaries and pensions. They’re replaced by leaner, meaner organizations. These will have more specialization—whether that be geographical or topical. Most will focus efforts on the less-costly online version, many even refusing to print a written product.

Here’s my two cents: who gives a shit?

I think people will always want news and some smart, empathetic opinion, and there will always be journalists who crop up to fill that void. But if we’re getting paid a little less, no matter. If we’re working with ten other people instead of 500, so be it.

Most journalists I’ve met really care about people, individually but—especially—collectively. And they’re smart people. Brilliant, some of them. They’ll find a way to make these changes result in better journalism for the public.

Although some probably are, most aren’t out to be famous or, heaven forbid, make a buck. (One Ms. Teter has said if she wanted money she would have been a plumber.) So we have nothing to lose, right? Except, maybe, a sense of complacency and security.

But if our readers don’t have that in their own jobs, why should we? The lack of security won’t hinder our ability to do our jobs any more than we allow it to. And we may do away with the massive top-down corporation in the process.