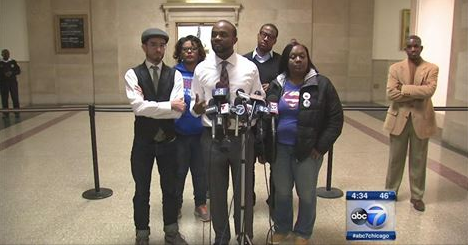 A press conference to discuss what we are working toward with the release of the Laquan McDonald video. Me at left, William Calloway at the podium, and Dorothy Holmes, right, mother of Ronald Johnson, who was killed by police a week before Laquan McDonald. Thanks to ABC7 for the screengrab.

A lot has happened in the past week, including my column in the Guardian; a New York Times article about me being barred from the press conference my lawsuit precipitated; and a Columbia Journalism Review article about my as-yet non-tethered nature in the news industry.

But here’s the latest.

My lawyer and I are demanding that all documents related to Laquan’s case are immediately posted to the internet. (We’re using #LaquanOnline.) That’s the only way to show the public what they need to know in this rather obvious cover-up. (Kudos to the Washington Post editorial board for not mincing words!) Making everything public is the only way the city will “heal,” as Rahm often likes to say.

We’ve filed a FOIA for everything involved in the case, but we are very interested in the first half of one particular video, if it exists; the video from one particular police car, if it exists; and the mysteriously missing audio from all the tapes. Also, crucially, any statements taken from any officers on scene; and the names of all the officers on scene that day.

But it’s not an isolated incident, as most of us know, and this case finally brought that idea into the sails of major media. In the article linked above, the Washington Post editorial board called for the heads of Police Superintendent Garry McCarthy and Cook County State’s Attorney Anita Alvarez. And the Post wasn’t easy on Rahm, either. Said the cover-up likely stretches all the way to him. Ben Joravsky also had an insightful column about Rahm’s position in all this.

In my view, Rahm needs to discuss the data behind police shootings. There’s one per week on average since at least 1986, according to the Reader’s Steve Bogira and copious data. (There are no signs of it slowing, as McCarthy has bewilderingly stated.) And Rahm needs to discuss the concrete steps he’s taking to make sure the shootings slow to a near halt. Not vague references to “culture.”

A good start would be to tear down and rebuild the so-called “Independent Police Review Authority,” tasked with investigating police misconduct. They have historically found virtually no officer at fault. Even a whistleblower has come out and shown (with emails!) that he was asked to falsify his investigations of police misconduct, and he was fired when he tried to push back internally. 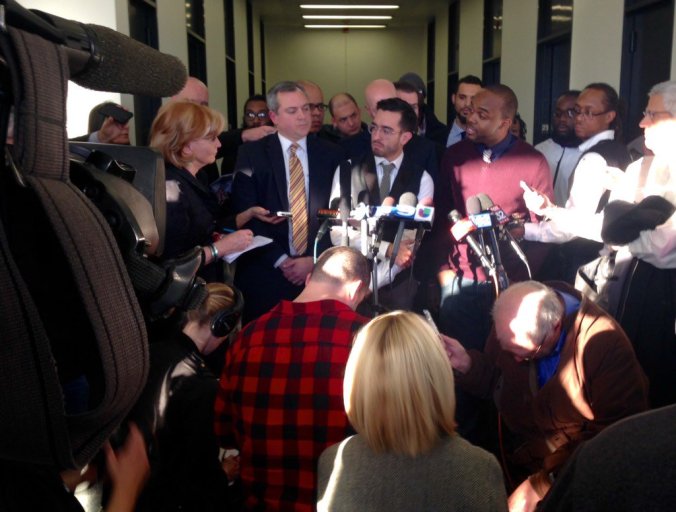 Attorney Matt Topic, myself, and activist William Calloway answer questions from reporters at the Daley Center courthouse Nov. 19 after winning our lawsuit against the city. (Obscured is the other attorney on the case, Craig Futterman.) We sought the release of a video that allegedly shows police shooting 17-year-old Laquan McDonald 16 times on a Chicago street last year. Our suit accused the Chicago Police Department of using certain exemptions to the Freedom of Information Act without merit in withholding the video. Cook County Judge Franklin Valderrama ordered the city to release the footage by Nov. 25.

As this story is ongoing, please see my Twitter feed, @muckrakery, for the latest updates.

Speaking of Twitter, I’ll re-post here a few key items I’ve posted there since the ruling.

This weekend, Rahm Emanuel reached out to leaders in Chicago’s black community to try to get black activists to meet with him.

Some black activists undoubtedly will meet with Rahm; others say (via Facebook) that they will not. I don’t blame them.

One black activist says she’s insulted at the invitation, b/c she and others couldn’t previously get a meeting to discuss police brutality.

(I also re-tweeted a link to this well-researched article, “The Laquan McDonald video will not cause violent protests”)

“The conversation” that the #LaquanMcDonald video adds to? It’s the one underpinned by the work @invinst has done and continues.

(Responding to some rumors that some news organizations already have the video, either leaked or on embargo) Let’s put it this way: the city has to tell me when they release the video, because I’m the #$&@ plaintiff. I’ll let you know when I know.

It’s our responsibility as journalists to describe what’s really happening. Unvarnished. That’s not “objectivity” (a myth). Nearly opposite.

When policing is done in communities of color, it’s done much differently than in white communities. The data supports this unequivocally.

It’s easy for people in responsibly-policed communities to think “that happens over there.” To not advocate for reform. Folks need a shake.

These are our police. This is our government. We give them their power. And thus, they are ALL of our responsibility.

Even though it’s on the newly-revamped About the Author page in the right sidebar, I couldn’t help but post this front and center. It’s just so pretty. A big thanks to Steve and Badryyah for their years of hard work and their several months with me. I’ll never forget it.

A graph of traffic to this site by month, starting in April 2009. I switched domains from greenletters.wordpress.com to brandonsmith.com in late October, which seems to have helped marginally. The monthly peak was November, with 456 hits.

Was reviewing the statistics on this site today, and thought I’d quickly share my findings with you.