While it made the lead story on the front of the local page today, my piece on Navistar suing the EPA got cut because of length. I’m posting the whole story here. 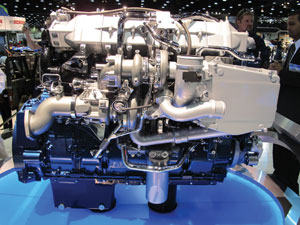 Navistar’s new engines recirculate a larger amount of exhaust back into the cylinders than has been done before, which cools combustion, limiting the formation of nitrogen oxides. Its competitors have chosen to treat nitrogen oxides after the fact.
By Brandon Smith-Hebson
Staff Writer

In a lawsuit filed July 5, Navistar accused EPA director Lisa Jackson of not doing her duty to uphold the Clean Air Act, and her agency of not doing its part to protect public health.

If Navistar’s claims hold true, trucks from model 2010 and beyond would not have to meet Clean Air Act standards when it comes to nitrogen oxides — chemicals best known to cause the brown haze around smoggy cities.

Navistar, the large local employer and national manufacturer of large trucks, hasn’t suddenly turned into an environmental crusader — in this case, its profits seem to be tied to the health of the ecosystem.

After bringing the issue to the EPA’s attention months ago, Navistar finally decided to sue.

Ever since 2001, when EPA issued limits for nitrogen oxides, diesel truck companies have been designing solutions to meet EPA’s 2010 deadline. Now that model year 2010 trucks are being delivered, Navistar is heralding an environmental crisis. Court documents obtained by the News-Sun shed light on the situation.

The company chose one route to deal with the emissions requirements, and virtually all its competitors chose another route. The system the competitors chose requires truck drivers to monitor the levels of a new emission-control fluid, and refill the reservoir when it gets low. Navistar’s system has its disadvantages, but it doesn’t require any input from the driver.

What happens when a driver doesn’t keep the new fluid topped off? Navistar, a contractor it hired, and the California Air Resources Board all agree: nitrogen oxide emissions skyrocket, rendering the EPA rule “irrelevant” altogether, Navistar’s suit stated.

EPA did not return calls for comment by press time.

Forgetting or refusing to fill this fluid is one problem, but emissions also pass the EPA’s limit if drivers substitute in water, or if the fluid freezes, or if the exhaust cools below certain temperatures, like in stop-and-go traffic.

Some fluid-based systems disable a truck’s functionality when a driver neglects the responsibility. However, online message boards abound with descriptions of how to evade the systems.

Navistar’s suit, filed in the U.S. District Court for the District of Columbia, alleges that EPA has certified the competitors’ systems without checking whether the systems work in the above list of situations.

John Paul said regulating heavy-duty diesel engines is a kind of final frontier when it comes to controlling air pollution.

“EPA has done a good job with most mobile sources, but mostly it’s light vehicles — cars and trucks,” Paul said. “The remaining big area to crack here are the heavy diesel engines.”

Paul is director of the Regional Air Pollution Control Agency, the body tasked with keeping the air in the Miami Valley safe.

“With diesels, they’re talking hundreds of thousands or a million miles on an engine,” he said, “so if you miss an opportunity to get a better control technology, that’s gonna be around for years and years.”

Nitrogen oxides are big contributors to both fine particulates and ozone, which make up smog, Paul said.

An industry publication, Fleet Equipment Magazine, has stated that fluid-based systems can obtain slightly better fuel economy than Navistar’s system, which recirculates exhaust back into the engine. A spokesperson for Volvo/Mack engines claimed a 5 percent improvement in fuel economy, while Navistar told the magazine it improved 2-3 percent. But the cost difference isn’t that significant when considering the additional costs of the emissions control fluid.

Karen Denning, the Navistar spokeswoman, couldn’t comment on the specifics of the suit, but said that her company maintains its general position:

“We believe that the onus for meeting (pollution) requirements should be on the manufacturer, not on the operator,” she said.

EPA may decide to argue that if the manufacturers of the fluid-based systems dictate a proper protocol for the systems’ use, EPA shouldn’t be held responsible when the protocol isn’t followed.

A win for Navistar in the suit will be a boon to its credibility, as good designers and as an environmentally-conscious company.

If Navistar loses, their competitors get to say their fuel economy has improved and not specify why. The “why” will be because they leave decisions about the environment up to their customers: both corporate and individual operators of this nation’s trucks.